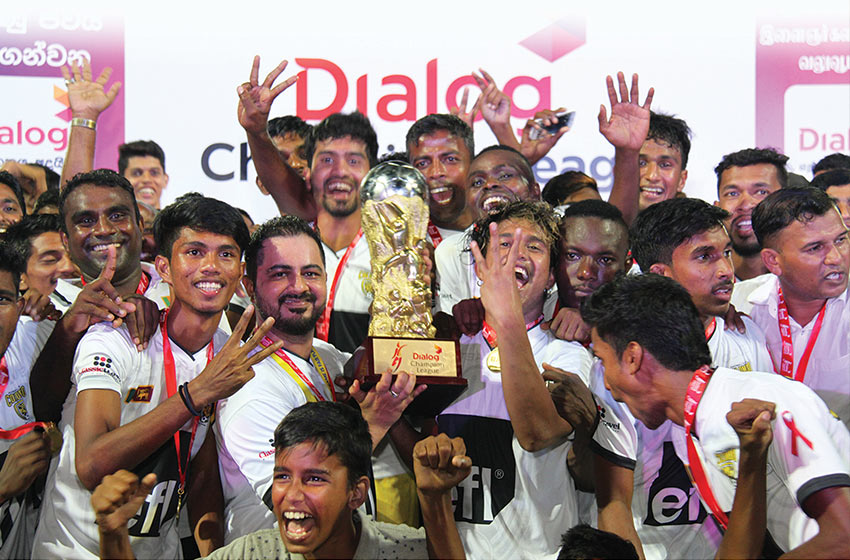 Colombo Football Club (Colombo FC) came to be in April 2008. The club was formed to foster and nurture local talent in the city of Colombo. Colombo FC started in Division 3 and made its debut in Division 1 in the 2014/2015 Season. Their second year in Division 1 saw Colombo FC win the Dialog Champions League 2015/2016. Colombo Football Club retained the league title the following year and completed their Hat-trick in winning the League Championship recently for the 2017/2018 Season amidst a full house on 14th January 2018. Fitness & Sports is proud to present the 3 Time Champions of the Dialog Champions League so our readers can learn about their path to glory.

Mohamed Hasan Roomy: I started coaching Colombo FC in 2010 at the time we were in Division 3. 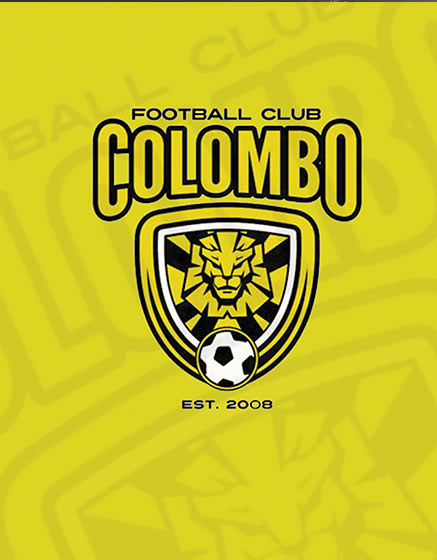 The team had not won any trophies in those early days but since then we achieved 3 Premier League Championships and 1 FA Cup Championship in a relatively short period of time.

F&S: The team has won 3 consecutive championships, what are the main factors that make them champions?

MHR: The main reason is the discipline within the club. We have a good mix of talented young and experienced players. The management (Expolanka Freight – EFL) has supported the team a lot by seeing to the individual welfare of the players. This allows the players to have a peaceful mind and to focus on their football which leads to success on the field. Team discipline along with the great support from the club management and the hard work of the entire team are the key factors that determined our success.

F&S: How many times a week do you train and do you work on the different skills separately? Describe.

MHR: We practice 3 times a week if needed we practice 4 times a week and even on weekends depending on our requirement. Our practice sessions last 2 and a ½ hours. We have a good coaching team with an assistant coach, a goal keeping coach and a physio as support staff. In my coaching, I place emphasis particularly on 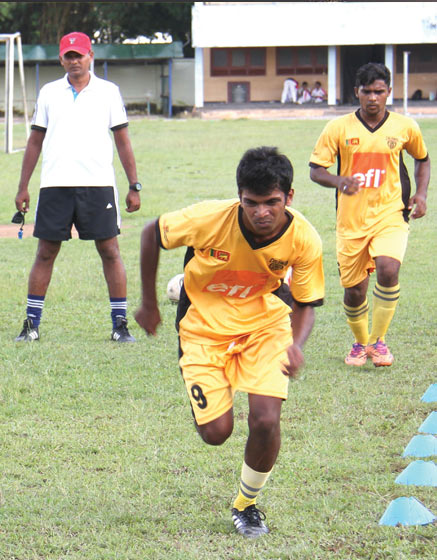 skills that need to be worked on in the team. Our sessions start with a team warm up followed by getting a feel for the football (kicking, heading etc.) then we progress on to the specific skill sets we want to work on. The final phase of the session is centered on tactics. The goal keepers works with the goal keepers on their skill sets while I train the other players. If I need a goal keeper for the skills that I am working on then I get the goal keepers also involved in the exercise to further emphasize the tactics that I want to teach.

F&S: Football is a very fast and high endurance game, how do your players prepare to meet the fitness level required to become champions?

MHR: Our players are very fit and that is the reason that we have conceded the least number of goals to the opposition in the last 3 seasons. In 2015 and 2016 we were the team that scored the highest number of goals. During our training sessions I incorporate a lot of fitness drills tailored to the individual requirement of each player. We use a lot of body weight exercises for fitness conditioning during the season. The players carry each other to build strength and muscular endurance. During the off season we use the gym at the EFL Campus for these requirements. I conduct beach training as well in the off season to work on speed and explosiveness. At the gym we do circuit workouts where each exercise lasts for 30 seconds and then they move to the next station. Physical training is a very big component of our training.

F&S: What is the most enjoyable part of being the coach of the Colombo Football Club?

MHR: I enjoy every moment as the coach. Most of the players come from my school team Zahira College and I have coached them before so they know my expectations and this makes my job a lot easier. Of course winning our matches is the most enjoyable part of the job. Even if we don’t win, I try not to get too disheartened because we all know that we can bounce back. I don’t feel the pressure because I have a great team and great support from the management. This is why my job is very enjoyable and I love every minute of it.

F&S: Now that you have achieved great success, what is your next goal?

MHR: We have won 3 Championships and now I look forward to us winning the 4th Championship. Last year we played the Asian Football Confederation Cup Championship and though we did not win we played very well as we played against a very strong Indian club with a hundred year history and we lost 2 goals to 1. Our boys gave a great fight and I am very proud of them. We gained a lot of experience from that international tournament playing against professional players from a much larger league. This year I want my players to progress in the AFCC tournament and to win our 4th Dialog League Championship.

Fitness & Sports: When were you appointed team captain and how has this role shaped you as a player and in your personal life?

Mohamed Rawmy Mohideen: From my childhood I have loved football. My father also loved football and he was a big football fan. At 16, I played for Ratnam SC a prominent football club. I played for 7 years at Ratnam FC and won 7 Premier League Trophies and 6 FA Cups for the club. I came to a point in my life where I wanted to get married and start a family. To do this I needed a steady income and it led me to join Colombo FC. Through the club, I got a job at Expolanka. Since 2014, I have been playing for Colombo FC having joined as a senior player and a former Sri Lanka National Player and I was appointed captain. In my captaincy Colombo FC has won 3 Premier League Championships and 1 FA Cup. At Colombo FC my life improved as I have a good income to take care of my family. After joining the club and getting the captaincy I got a lot of respect from the football community and those around me. My life has changed for the better and I am very happy here.

F&S: How would you describe your team mates and what are your reasons for the great success that Colombo FC has enjoyed for the last 3 years?

MRH: I advise the other players as they are much junior to me. I am like an older brother and I share my experience with them to help them improve their game. At Colombo FC we are a family. Our discipline and dedication and our close bond with each other make us successful on the field. F&S: What position do you play and describe it’s physical requirements? 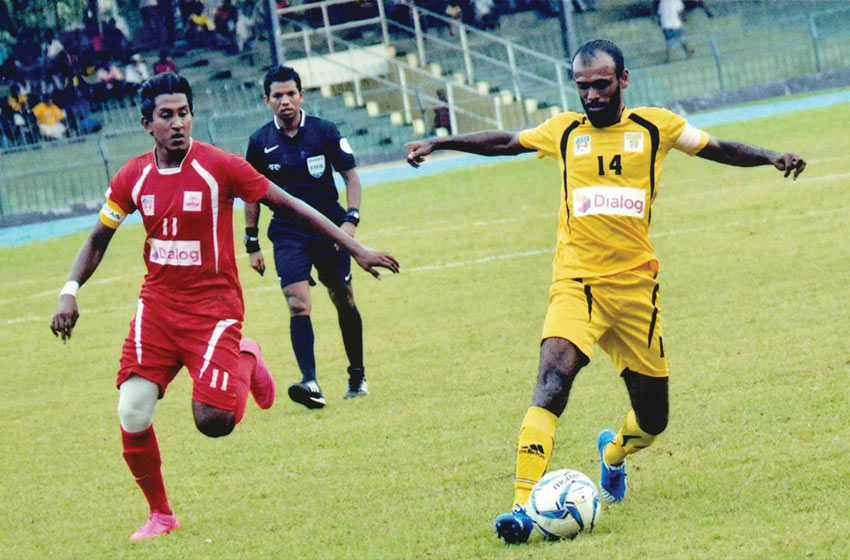 MRH: I am a natural midfielder. I have played midfield for most of my career for Sri Lanka and in my club career. A midfielder is the heart of the team. The midfielder should support the defense and the attack. The midfielder must have a very high level of fitness, have very good awareness and decision making ability. Now I play centre defender. For a centre defender, you need to have a good mindset, be aggressive, communicate with the other defenders and be at the right place at the right time.

F&S: Do you see football as a great opportunity for a successful life?

F&S: What are your goals for yourself and your team?

MRH: I have 2 years of football left in me. I want to help Colombo FC win more Championships and then when I retire from playing football I want to coach. I have a coaching license from the Asian Football Confederation.

F&S: Who would you wish to appreciate that have helped you and your team achieve success in Sri Lanka Club Football?

MRH: I want to thank my parents, the Managing Director of Expolanka Freight, Mr. Saif Yusoof for giving me this opportunity and my coach Mr. Mohamed Hassan Roomy for managing me and helping me prolong my football career.

Fitness for the stage